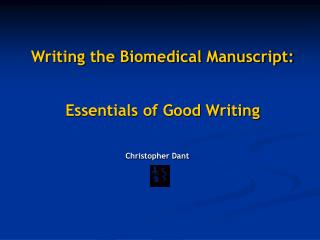 Writing the Biomedical Manuscript: Essentials of Good Writing. Christopher Dant. A Recognized Problem. “ There is no form of prose more difficult to understand and more tedious to read than the average scientific paper!”. -Dr. Francis Crick, 1994 The Astonishing Hypothesis.

Step up to Writing - . training workshop jennifer nehl innovative education solutions. step up to writing is about:.

Grant Writing 101 - . “ there is no grantsmanship that will turn a bad idea into a good one, but there are many ways to

Writing a research manuscript and getting it published - . phil halloran american journal of transplantation wednesday,

Experience Nonfiction Writing - . cindy matthews. why focus on non-fiction writing?. ‘with the exception of attendance,

Writing Examples - . changes in how the domains are weighted weighting means that the scores in some writing domains