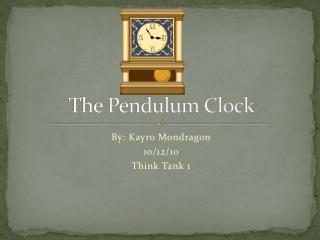 Nature and Needs of Gifted Students Module I of V (6 of 30 clock hours) - . kristin fawaz gifted and talented mckinney

Neha’s Alarm Clock - . iv english. there is a clock inside you which tells you when to eat, when to sleep and when to

Quiz - . 1. this indian group (company) owned by odhavjibhai. r. patel is the the largest clock manufacturer in the

Iodine Clock Reaction - . or how long does a reaction take?. three mysteries:. 1. how can the reaction between two

MULTIPLE CHOICE - . the pit and the pendulum. 1. what is the famous first line of this story ?. there are few persons,