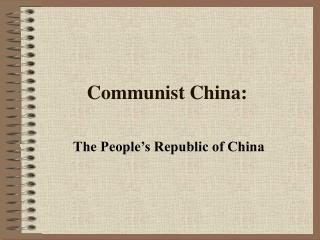 Education, Rustication and Communist Party Membership: What Pays? What Does Not Pay? - . hongbin li junsen zhang (others)

Geography/China - . major geographic features: 1. surrounded by a variety of natural barriers that has allowed china to

Unit 5: China - . history. for centuries china was a closed country trading only with their neighbors. they distrusted

Warm Up - . describe the cartoon. why is the man in chains? what are all the tags? how does this relate to imperialism?.