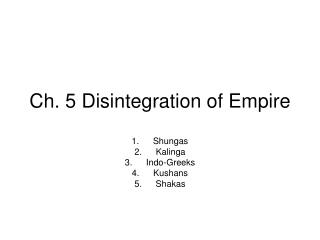 Ch. 5 Disintegration of Empire. Shungas Kalinga Indo-Greeks Kushans Shakas. Political events in India became diffuse, with a variety of kings, eras, and people. Caught up in the turmoil in in Central Asia. The Disintegration of the Carolingian Empire - . louis the pious. continued policy of monastic reform benedict of aniane

Ch 4: Empire in Transition - . the road to revolution. what comes to mind when you think about the american revolution ?.

Disintegration and Reconstruction of France - . by: claire solomon. the wars of religion in france. almost 40 years of

Ch 4 Slavery and Empire - . essential questions. how did the modern system of slavery develop? what was the history of

Ch. 5 - Subject verb agreement . ch. 5. agreement of subject and verb. a verb should agree in number with its subject.