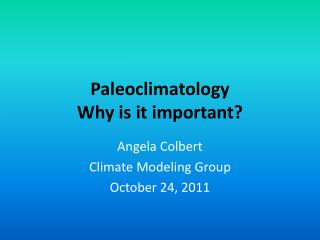 Paleoclimatology Why is it important?. Angela Colbert Climate Modeling Group October 24, 2011. What is Paleoclimatology?. The study of past climates. Use proxies to reconstruct temperature and other records Use models to try to test theories to explain the proxy records Proxy Examples Important developments of the Vertebrates: brain and sense organs - . the ancestors of vertebrates switched from filter

NNPS &amp; TNCC - . welcomes you. why you’re here. virtually everyone can – and will – tell you that college is

Wetlands - . important habitats &amp; ecosystems. what are “wetlands”?. what do you think “wetlands” are?.

Government Officials in Ancient Egypt - . what did government officials do?. just like today, ancient egypt had different

IMPORTANT REMINDER - . did you have evidence that you completed 24 game questions? (3 topics x 8 questions). topic 4: the

Why is perception important? - . what is objective reality? how do we know what is

Summary of Important Concepts - . soil is a layer of weathered rock, minerals, and organic matter at the earth’s

Why is this issue important? - In recent years, ssa’s representative payment program has received attention from:

Important words 重要单词 - . 1. mistaken adj. there you are and you come from the west end of london, born in lisson

National Credentials: Why They Are Important - . kathryn benson, ncac ii, sap chair, ncc ap. what is an addiction

Welcome to Cookie Training! - . thank you so much for helping your troop with cookie sales! this is such an important

Important - . the systems, drawings and pictures depicted in this presentation are used for discussion purposes only. pv