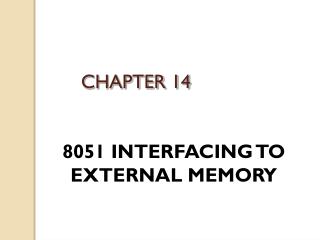 CHAPTER 14. 8051 INTERFACING TO EXTERNAL MEMORY. Memory Capacity. The number of bits that a semiconductor memory chip can store Called chip capacity It can be in units of Kbits (kilobits), Mbits (megabits), and so on This must be distinguished from the storage capacity of computer systems