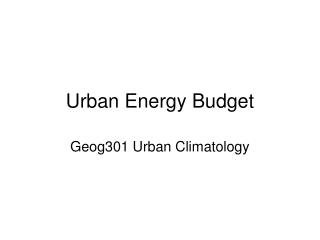 Urban Settlements - . key questions. what is an urban settlement? the distribution of major cities in the world

Work and Energy - . dr. robert mackay. clark college. introduction. what is energy? what are some of the different forms

AS Geography - . atmosphere &amp; weather energy budgets. meteorology is the study of the atmosphere. weather is the