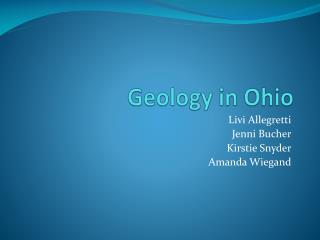 The Geology of Ohio - . under ohio the rocks tell a fascinating story wherever you go. northern ohio borders lake erie.

Geology - . justin p. jones. the world is a canvas. a geologist examines the many stories told by the earth’s rocks and

Geology - . sol 5.7. geology 1. what is weathering?. answer. the gradual wearing away of rock by the forces of wind,

Geology - . an overview of plate tectonics. disturbing forces. deformation of rock involves changes in the shape

Geology - . how to identify what kind of rock it is, find how rocks are made, and what they are used for. the three

Geology - . the earths structure. earths history. close examination of a globe results in the observation that most of

GEOLOGY - . geologists. 1. study the materials that make up the earth and the processes that shape its surface and

Geology - . sol 5.7. geology 1. what is weathering?. answer. the gradual wearing away of rock by the forces of wind,

Geology - The himalayas were thrust up when india collided with asia 50 million years ago. geology. geology’s factors

Geology - . geologic time. geology. the study of the earth, rocks, and fossils. u