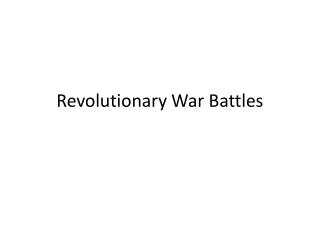 Revolutionary War Battles. After the battle of Bunker Hill, who was named Commander of the Continental Army?. George Washington. January 1776.

Revolutionary Lit - . midterm 2011 review. paine argues that the best way to defeat the british is for … the troops of

Quickwrite: - . to what extent had the colonists developed a sense of their identity and unity as americans by the eve of

Millennium MRI - . a long time ago . . . but not in a galaxy far, far away. the wcab decided the outcome of battles

CHAPTER 11-THE CIVIL WAR - . section 1 notes-from bull run to antietam. section objectives. what was the significance of

Leon Trotsky - . annette miramontes period 1. a young revolutionary. leon trotsky was born to a jewish family with the

The Revolutionary Era - . chapter 4. war and diplomacy. the 18 th century was an interesting juxtaposition of the