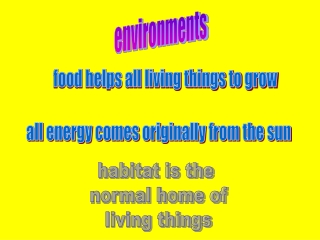 Chapter 3 Organizational Environments and Cultures Dr. Ellen A. Drost - . external environments. after reading the next

Plants in Different Environments! - . can you use your observation skills to identify the following environments? look at

Making Environments Accessible - . day 2. today’s goals. you will be able to: identify characteristics of high quality

Enhancing Services in Natural Environments - . common themes from the community of practice on part c settings/natural