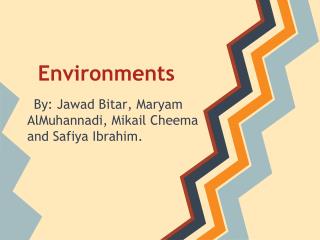 Environments . By: Jawad Bitar, Maryam AlMuhannadi, Mikail Cheema and Safiya Ibrahim. Geography of Phoenicia. On the western end of the fertile crescent, along the mediterranean sea there is a land known as Phoenicia. Three chief cities. Environments - These may be natural and/or cultural. they have particular characteristics and features which can be the

Environments - . 5 th grade science amanda sax. click to continue. click on an environment to learn more about it:. coral

environments - . food helps all living things to grow. all energy comes originally from the sun. habitat is the

ENVIRONMENTS - . ecosystem all the living and non-living things that interact with each other in an environment.

Driving Environments - . rural driving. the speed limit on rural roads when not posted is 35 mph. many rural roads are

External environments - Who's in charge?. for both

Online Environments - . with 99% of college students online, understanding the online landscape has become imperative for

Describing Environments - . by: cade guidry. the area around where i live is rural. a landform that i could visit in a

Tidal Environments - . i. affects of turbulence. a. turbulence - wave action b. keeps inshore waters from

Intelligent Environments - . computer science and engineering university of texas at arlington. databases for

Chapter 1 The Dynamic Environment of HRM - . introduction. hrm is a subset of management. it has five main goals:.