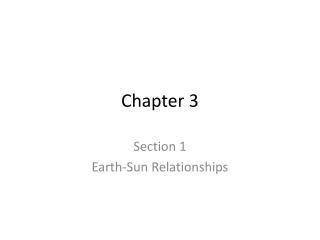 Chapter 3. Section 1 Earth-Sun Relationships. Objectives. Explain the difference between climate and weather Identify the significance of the Earth’s tilt, rotation, and revolution Locate the Tropics of Cancer and Capricorn. Climate and Weather.