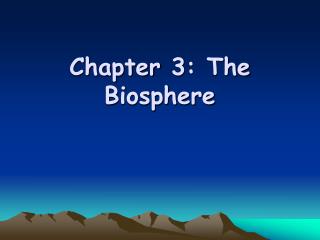 Chapter 3: The Biosphere. Objectives Identify the levels of organization Describe the methods used to study ecology Identify the source of energy for life processes Trace the flow of energy through living systems Dynamic Planet- Sub unit 3 Battle for the Biosphere - . 3.1a what is the value of the biosphere? what are biomes? why are

ECOLOGY - . chapter 4. ecology. ecology is the study of the interactions between living things and their environment. the

Biology 20 - . equilibrium in the biosphere. ecology. explain the one-way flow of energy through the biosphere and how

Chapter 52 An Introduction to Ecology and the Biosphere - . essential knowledge. 2.d.1 – all biological systems from

The Hydrosphere and Biosphere - . life on earth is restricted to a very narrow layer around the earth’s surface. this

Chapter 3 - . the biosphere . what is ecology?. ecology: the scientific study of interactions among organisms and between

HUMANS IN THE BIOSPHERE - . a changing landscape objectives: 6.1 describe human activities that can affect the biosphere.

Humans in the Biosphere - . chapter 6. a changing landscape. growing populations depend on the limited natural resources

Chapter 47 - The Biosphere - . what is ecology?. ecology is the study of the interactions of organisms with one another