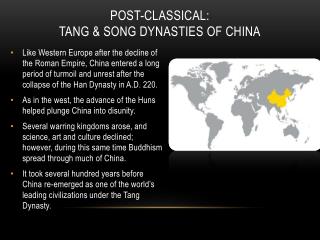 Post-classical: tang & Song dynasties of china. Like Western Europe after the decline of the Roman Empire, China entered a long period of turmoil and unrest after the collapse of the Han Dynasty in A.D. 220. As in the west, the advance of the Huns helped plunge China into disunity. Civilizations in Crisis and Change - . ottoman, japan, china and russia. the mongol invasions of the 13th and 14th

Responding to Classical Liberalism - . why did ideologies develop in opposition to classical liberalism? how did