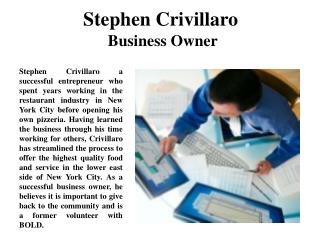 Stephen Crivillaro Goes from Green Energy to Entrepreneur - Stephen crivillaro was born and raised in new york city. when

Business Owner - . sobering statistics. 3 out of every 10 workers between the ages of 25-65 will experience an illness

What Every Business Owner - Retirement plans undressed…. what every business owner. needs to know!. today is not the

Welcome Local Business Owner - . topics covered today. why do you need to market your business online? old way vs. new

Being a Business Owner - . section 4.2. read to learn. the four main ways to become a business owner and the advantages

Jill Marie Runnion - Business Owner - When jill marie runnion is not running her own business, providing childcare, or

Sophia Cecola A Business Owner - Sophia cecola is a proud benefactor of the barrington 220 educational foundation, a