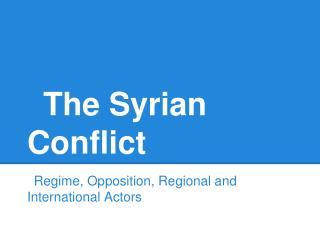 The Syrian Conflict. Regime, Opposition, Regional and International Actors. Pre-Revolutionary Syria. The Assad Regime: Hafez al-Assad. Hafez al-Assad took over Syria and the Ba'ath Party in a bloodless coup known as the Corrective Movement in 1970 The Syrian rebels - On the frontlines with the free syrian

Daniel 11: The Syrian Wars - . and beyond…. acknowledgement. i like to thank bob faulkner for his very detailed