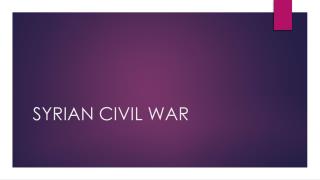 SYRIAN CIVIL WAR. K W L. Syria. Syria is a nation of about 21 million people -- roughly 2 million more than the population of New York state. It sits on the eastern shore of the Mediterranean Sea in the Middle East. Syrian Civil War - . protests and civil uprising. the conflict started at protests and uprisings as early as january of

Syrian Civil War Background - . ottoman syria. conquered by the ottoman turks and selim i “the grim” in 1516 followed