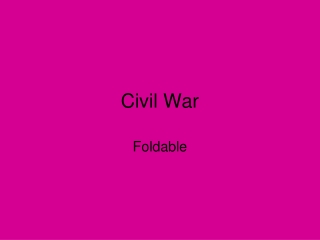 Civil War. Foldable. Causes. Slavery- not a necessity in N (not reliant on a cheap, reliable workforce). Buy agricultural products cheap>make into finished products= $=wages for workers South=economy based on agriculture. Agriculture is heavily reliant upon uncontrollable forces: weather,