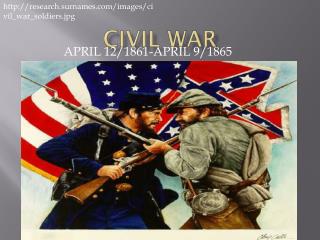 http://research.surnames.com/images/civil_war_soldiers.jpg. CIVIL WAR. APRIL 12/1861-APRIL 9/1865. President Lincoln. . Won the 1860 election. He was a member of the us house of representatives before he was president. His nickname is honest abe . Union president. .