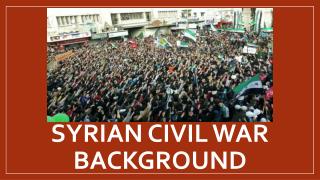 Syrian Civil War Background. Ottoman Syria. Conquered by the Ottoman Turks and Selim I “the grim” in 1516 Followed by the conquering of Egypt bringing the Mamluk Empire into the Ottoman Empire Selim kept the leaders Mamluk leaders of Syria the same and formed the area into one eyalet Syrian Civil War - . protests and civil uprising. the conflict started at protests and uprisings as early as january of

Background to Civil War - . conflict over slavery — in new hampshire and across the nation. ulysses s. grant. next