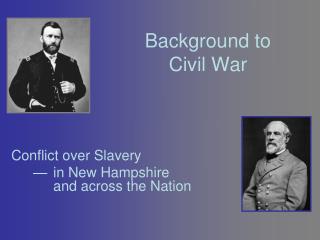 Background to Civil War. Conflict over Slavery — in New Hampshire and across the Nation. Ulysses S. Grant. Next to President Lincoln himself, these two great generals. are probably the men we most closely associate with the Civil War. Robert E. Lee.

Syrian Civil War Background - . ottoman syria. conquered by the ottoman turks and selim i “the grim” in 1516 followed

ROAD TO CIVIL WAR! - . compromise of 1850. should slavery be legal in the mexican cession?. california wants to enter the

Road to Civil War: - . secession and war. the election of 1860. the issue of slavery eventually caused a break in the