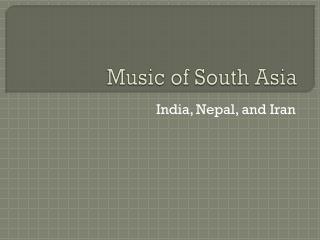 Music of Asia - . china, japan, and india. china and japan. similarities: music is tied closely to dance and drama opera

The Music of Asia - . a breif overview. asia has many countries and each has a unique mix of sounds and styles. we will

Music of Eastern Asia - Japan, china, korea, taiwan. music of eastern asia. time to write…. what are your preconceived