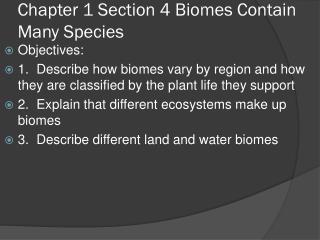 Chapter 1 Section 4 Biomes Contain Many Species. Objectives: 1. Describe how biomes vary by region and how they are classified by the plant life they support 2. Explain that different ecosystems make up biomes 3. Describe different land and water biomes.

Chapter 1, Section 4 - Quick write: review. chapter 1, section 4. reason!. what is one word to summarize the

BIOMES CONTAIN MANY ECOSYSTEMS - . regions of earth are classified into biomes biome=large geographic areas that are

Chapter 1 Section 4 - . decimal notation. fractions and decimals. to write a fraction as a decimal, use long division to

Chapter 1 Section 4 - . migration to america. portuguese exploration:. the portuguese will become the early leaders in

Chapter 4 Section 1 - . learning goal: students will be able to understand the causes and outcomes of the civil war and

Chapter 4 Section 1 - . systems of equations in two variables. so, what constitutes a solution? notice that we have 2

Chapter 4: Section 1 - . early civilizations in greece. do now: . in your notebook, answer the following questions: *how

Chapter 4 Section 1 - . learning goal: students will be able to understand the causes and outcomes of the civil war and

CHAPTER 4 SECTION 1 - . i can recognize the importance of atp as an energy-carrying molecule. dok 2 i can identify energy

Chapter 1 Section 4 - . objectives: 1.4.1 describe the measurement system most scientists us. 1.4.2 explain how light

Chapter 4 Section 4-1 - . consumer purchasing. why do you buy what you buy?. what was the last thing that you purchased?