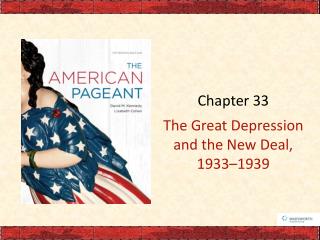 Chapter 33. The Great Depression and the New Deal, 1933–1939. I. FDR: Politician in a Wheelchair. Roosevelt’s personality Formed by his struggle with infantile paralysis: Put additional steel into his soul Suffering humbled him to the level of common clay Chapter 33 - . hyperbola. 双曲线. definition:. the locus of a point p which moves such that the ratio of its distances

Chapter 33 - . heavy-duty truck trailers. objectives (1 of 2). describe what is meant by semi-trailers and full trailers.

Chapter 33 - . the building of global empires. imperialism in asia, ca. 1914 . the idea of imperialism. term dates from

Chapter 33 - . invertebrates. figure 33.1. overview: life without a backbone invertebrates are animals that lack a

Chapter 33 - . discussion and review. describe the causes and onset of the cold

CHAPTER 33 - Click your mouse anywhere on the screen to advance the text in each slide. after the starburst appears,

Chapter 33 - . the great depression and the new deal. fdr: politician in a wheelchair. disabled from polio at a younger

Chapter 33 - . immunologic disorders. anatomy and physiology of the immune system. anatomic structures and

Chapter 33 - . building support for your program. chapter 33 key points. support from a variety of sources is

Chapter 33 - . the nature and propagation of light.