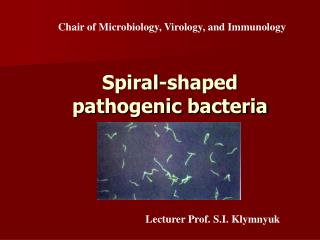 DNA, RNA, &amp; Proteins - . the shape of dna. a dna molecule is shaped like a spiral staircase and is composed of

Koru Spiral Plants - . the koru is a spiral shaped plant. to people of new zealand, the koru represents the unfolding of

Syphilis! - . treponema pallidum. what is syphilis?. a sexually transmitted disease, living in the genital tract, and can

Infection Control - . ensuring your client’s and your safety in the salon environment. bacteria. one-celled

MICROBIOLOGY - . study of bacteria &amp; viruses. what are microbes?. microscopic organisms that include bacteria,

Bacteria - The world of the microorganism. bacteria. bacteria: the cell itself. bacterial shapes. cocci: spherical

BACTERIA - . bacteria are microscopic organisms, which come in many shapes and sizes, but even the largest are only 10

Bacteria - . b 1.1 bacteria. bacteria. some types of bacteria live in extreme environments where few other organisms can