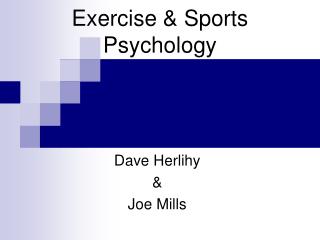 Exercise & Sports Psychology. Dave Herlihy & Joe Mills. Exercise and Sports Psychology. The relationship between mind & body has been known for centuries. Ancient Greeks believed exercise was an important component of both physical and mental health. The Science of Psychology - . chapter 1. what is psychology?. psychology is the study of behavior and mental processes

Sports Medicine Careers - . introduction to all the careers involved in sports medicine. the study and application of

Warming Up P roperly for Sports and Exercise - . objectives. understand the benefits for warming up properly for sports

What is - . ?. psychology foundations unit 1. the history and scope of psychology. what is psychology? psychology’s

Sports and Exercise - . a lot of people in england, especially young children, are encouraged and made-aware of the

Sport and Exercise Psychology - . the scientific study of people and their behaviors in the study of sport and exercise.

Cancer and Exercise - . b. elizabeth delasobera, md sports medicine fellow. outline. the mechanism for how exercise can