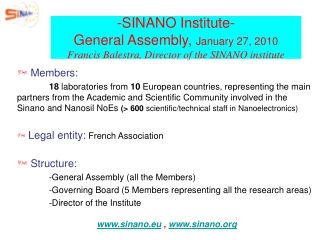 Zonta Membership - . growing one member at a time. zonta international omc committee. without members - there is no

MEMBERSHIP - . presentation to members november 21, 2012 by bruce keith on behalf of the membership committee. club

SIAA theory of change - Members identify opportunities for partnership and collaboration. members have a sense of

THE MEMBERS OF CONGRESS - . what duties are our representatives performing?. background 535 members not a true cross

Course Description - Credit(s) earned on completion of this course will be reported to aia ces for aia members.

A company for “members” by “members” - . keith brewer. promotion director.

Our Mission - To improve our members' financial well being. to be the premier financial service provider to our members.