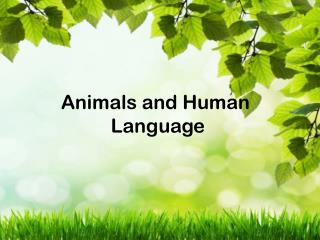 Animals and Human Language. TALKING TO ANIMALS By/ Areej Baqays. : Talking to animal: . There is a lot of spoken language directed by humans to animals, apparently under the impression that the animal follows what is being said . . Animals and human language - . there are a lot of stories about creatures that can talk. we usually assume that they are

Animals and Human LAnguage - . communicative and informative signals. intentional vs. unintentional. distinctions between

Lecture 3 Animals and Human Language - . a. animals and human language. can animals learn to communicate with humans

HUMAN LANGUAGE AND COMUNICATION: - . why is this research area still an important challenge?. joseph picone, phd

Ethical Issues and Non-human Animals - . likely question: discuss ethical issues in the use of non-human animals in

Can animals learn language? - . koko the gorilla. http://www.koko.org/ koko is a 32-year old female gorilla who has

Human Language Technology - . overview. acknowledgement. material for some of these slides taken from j nivre, university