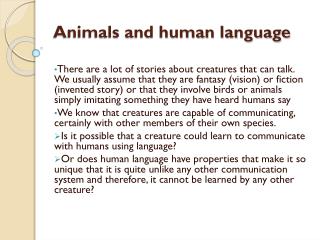 Animals and human language . There are a lot of stories about creatures that can talk. We usually assume that they are fantasy (vision) or fiction (invented story) or that they involve birds or animals simply imitating something they have heard humans say Animals and Human LAnguage - . communicative and informative signals. intentional vs. unintentional. distinctions between

Lecture 3 Animals and Human Language - . a. animals and human language. can animals learn to communicate with humans

HUMAN LANGUAGE AND COMUNICATION: - . why is this research area still an important challenge?. joseph picone, phd

Ethical Issues and Non-human Animals - . likely question: discuss ethical issues in the use of non-human animals in

Can animals learn language? - . koko the gorilla. http://www.koko.org/ koko is a 32-year old female gorilla who has

Human Language Technology - . overview. acknowledgement. material for some of these slides taken from j nivre, university