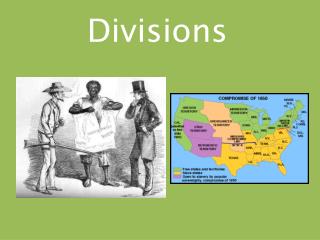 Divisions. “Old fuss and feathers”. Election of 1852. Democrats nominate little-known New Hampshire politician Franklin Pierce Pierce was reliable on the issue of slavery- promised to enforce the Fugitive Slave Act and honor the Compromise of 1850. Cell Divisions - . mitosis and meiosis. mitosis. division of the nucleus of all cells except sex cells produces 2

Political Divisions - . sol wg.10a, b. essential questions. what are some examples of political divisions at the local

Political Divisions - . new divisions. the impact of the kansas-nebraska act whigs, some democrats, free-soilers, and

International Spatial Divisions - . spatial divisions are regions of the earth’s surface over which groups of people

Jewish Religious Divisions - . who they were, and what they believed 2013.05.22 . the sadducees. the gospels refer often