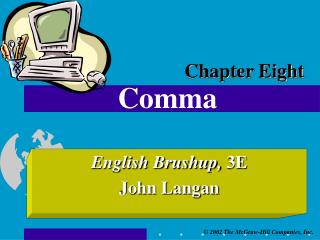 Chapter Eight. Comma. English Brushup, 3E John Langan. USE COMMAS. To separate items in a series . To set off introductory material . On both sides of words that interrupt the flow of thought in a sentence. Between two complete thoughts connected by and, but, for, or, nor, so, yet. Comma - . chapter 8. chapter outline.  comma uses: between items in a series after introductory material around words

Comma , - . if there is a pause , a comma is needed. commas help clarify meaning. between items in a series (3 or more

Comma , - . you should put a comma before a person’s name if you're talking directly to them… come here, lily! …or

Comma - . 2013. compound sentence. rule: use a comma before the conjunction to separate 2 independent clauses (freshmen

Comma - By: matt bach and matt kuberski. comma. definition of a comma. made to help the reader a comma tells readers when

Comma Coma - . continued…. use a comma before and/or after an interjection. wow, what a beautiful dress. hey, that’s

Comma Usage - . yep, there are rules you have to follow!. rule #1: separate items in series. separate individual words,

Comma Sense - . twelve basic suggestions ,. commas demystified. commas can be tricky to use. students often have a

The Comma - . tanya foulk. when to use a comma within a sentence. before any of the seven coordinating conjunctions that

Comma Usage - . mrs. zakrewski 7 th grade language arts. use commas to separate items in a series. note: items in a

Comma drama - . rule 1. use a comma to set off three or more items in a series. ex. on sundays i like to clean, do