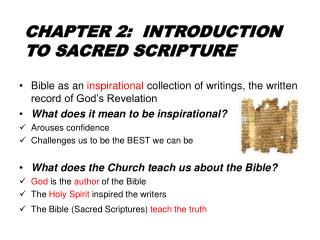 CHAPTER 2: INTRODUCTION TO SACRED SCRIPTURE. Bible as an inspirational collection of writings, the written record of God’s Revelation What does it mean to be inspirational? Arouses confidence Challenges us to be the BEST we can be 4 Chapter Review - . mesopotamia and the fertile crescent. what was the most sacred part of a temple?. the sanctuary. why

Sacred Vessels and Vestments! - . vessels: chalice (1). large, stemmed vessels with a cup-like top used by the priest at

Chapter #5: MOSFET’s - . from microelectronic circuits text by sedra and smith oxford publishing. introduction. in this