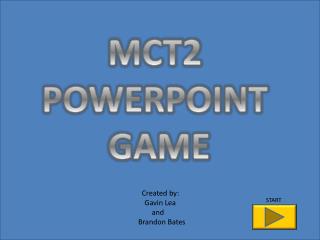 MCT2 - . practice test. divide into 2 teams. math trivia. begin. team a. team b. vs. question one. what is the greatest

MCT2 Jeopardy - . read the paragraph. we help each other with schoolwork. blanca is great at math. she helps me with

Most dangerous game powerpoint - . hayley jones. “but it was no mirage, he found, when he opened the tall iron gate.

Bellwork #21: MCT2 Practice - . the yellow and candy-apple-red murray bicycle with its metallic-red banana seat was my

Strategies for Taking MCT2 - Twas the night before testing. go to bed on time. . put a few number 2 pencils with erasers

Bellwork #16: MCT2 Practice - . which of the following statements from the lost boy by dave pelzer accurately portrays

Bellwork #5: MCT2 Practice - (1) the fog did not prevent planes from taking off. (2) the fog blanketed the airport.

Bellwork #6: MCT2 Practice - . which statement correctly identifies the structure of the chapter entitled the rescue as