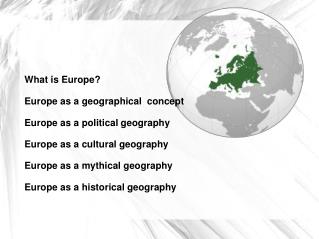 Ancient Europe - . geography of europe as a continent. europe is one of the worlds smallest continents, but has

Europe PubMed Central - . contents. europe pmc: a summary how content is added to europe pmc benefits of a europe-wide

A view from Europe - . 5 may 2009 john wilkinson chief executive. contents. some facts about the sector in europe how

Physical Geography of Europe - . sswg6a . describe the location of major physical features and their impact on europe.

India in the Making of Europe - . focus on the practical. not on spiritual nor on straight exploitation and concentration

Medieval Europe - . elizabeth nguyen. 7.6.1. 1. study the geography of the europe and the eurasian land mass, including