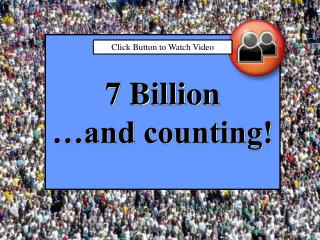 Counting: - If group one has n choices, and group two has m choices, then there are n  m ways to choose from group

Counting: - Choosing from a set. how many ways can we choose r things from a set of n things?. . important factors:can we

India @ 7 Billion - . tapping the strengths we have, to leverage the opportunities we will get . up a head. population

Counting and Probability - Slide 7-2. factorials. if we want to rearrange 7 people, we can use the multiplication

7 Billion and Beyond - What does it all mean?. 7 billion and beyond. population pyramids. the basics: notice the

Counting - . a nickel, a dime and a quarter are tossed. . construct a tree diagram to list all possible outcomes. . use