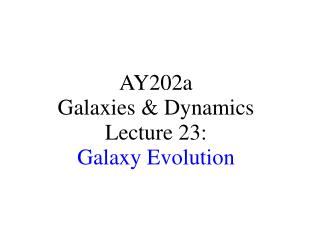 Planets and the Solar System - . there are perhaps thousands of galaxies in the universe. galaxies contain. planets moons

Galaxies and the Foundation of Modern Cosmology - . islands of stars. our goals for learning : how are the lives of

Stars and Galaxies - . unit: stars &amp; galaxies. topic: our sun. objectives: day 1 of 4 i will learn the definition

AN INTRODUCTION TO COMPUTATIONAL FLUID DYNAMICS - . shuisheng he school of engineering the robert gordon university.

Metapopulation and Intertrophic Dynamics - . from single species population dynamics (and how to harvest them) to complex