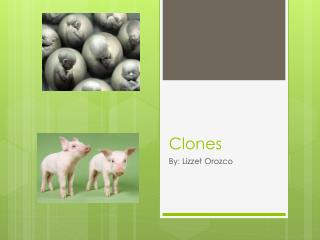 Clones. By: Lizzet Orozco. What are clones?. Clones - Genes, cells or whole organisms that carry identical genetic material because they are derived from the same

Clones - . what have we already cloned…. medical advancements, research, cloning……. where are we all with these

SnapView Clones - . upon completion of this module, you should be able to: describe snapview clone operations manage

Attack of the Clones! - . review. asexual cloning occurs in nature plants and less complex organisms can all duplicate

13.1 What Are Clones - ? . clones genetically identical molecules, cells, or organisms all derived from a single

Title: Clones in animals - . homework: learning package 11 due in today. ewe were always on my mind…. learning

Send In The Clones! - . the fact and fiction of identity theft. about neal o’farrell. ceo of my security plan and

Hemp Clones For Sale Colorado - Whether it is cbd tincture or anything else, you should take care of the provided

Attack of the Instagram clones - Social media has some great advantages, such as keeping in touch with loved ones and

AirBnB Clones in the market - Think about this unique circumstance. everyone of these explorers/travelers will