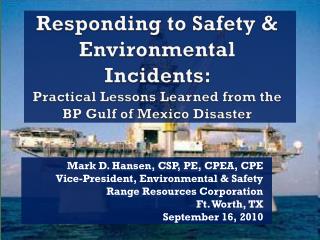 Environmental Health and Safety (EHS) Orientation Training - . faculty and staff. introduction. the objectives for this

Hazardous Waste - . every year, 3.36 billion lbs of toxic waste is disposed of or released into the environment waste

Is your center ready to manage a disaster and its aftermath? Practical tools to prepare you and your staff to manage an