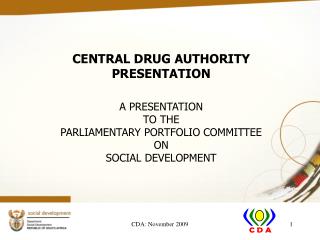 C D A. CENTRAL DRUG AUTHORITY PRESENTATION A PRESENTATION TO THE PARLIAMENTARY PORTFOLIO COMMITTEE ON SOCIAL DEVELOPMENT. C D A. Outline of the Presentation. Purpose of the presentation What is CDA Powers and functions of the CDA Supporting structures of the CDA C D A - . the central drug authority and the drug problem in sa a presentation to the parliamentary portfolio committee

A B C D - . a foss solution for libraries and documentation centres in the south. overview. background information on

A,C,D - . eliciting advanced achievement through abstract thinking, complexity, and depth. deletion is the

C D A - . the central drug authority achievements 2006/7 to date a presentation to the parliamentary portfolio committee

A B C D  D D C B A - Determine the numbers a,b,c,d that has specific multiplication property as shown below, where a