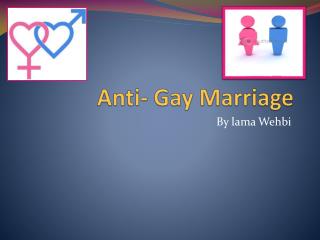 Anti- Gay Marriage. By lama Wehbi. Introduction . Gay Marriage is frowned upon by many, and if it is not regulated, it will continue to increase. The exposure to gay clubs and the public display of affection by gays already has a large influence on society . Gay Marriage - . by: valerie wirtschafter raquel rosenberg. the defense of marriage act of 1996. it provides that no

Gay Marriage Around the World - . by: erin nugen. one of the reasons is based on religion. the bible states that it is an

Gay Marriage Photography | You & Eye - Many of you are in the middle of their wedding organization. the pre-wedding

Straight Talk on Gay Marriage - . what do we mean by marriage?. the legal union of a couple as husband and wife -

A Constitutional Issue: Gay Marriage - . debating the constitutionality of a gay marriage ban…. why do the states

Gay Marriage and the LDS Faith - . what everyone should know…. what is the divine institution of