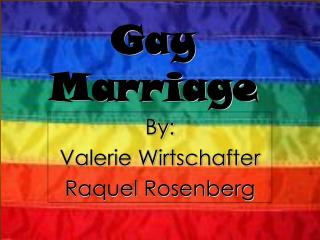 Gay Marriage. By: Valerie Wirtschafter Raquel Rosenberg. The Defense of Marriage Act of 1996. it provides that no State shall be required to give effect to a law of any other State with respect to a same-sex “marriage." Anti- Gay Marriage - . by lama wehbi. introduction . gay marriage is frowned upon by many, and if it is not regulated, it

Gay Marriage Around the World - . by: erin nugen. one of the reasons is based on religion. the bible states that it is an

Gay Marriage Photography | You & Eye - Many of you are in the middle of their wedding organization. the pre-wedding

Straight Talk on Gay Marriage - . what do we mean by marriage?. the legal union of a couple as husband and wife -

A Constitutional Issue: Gay Marriage - . debating the constitutionality of a gay marriage ban…. why do the states

Gay Marriage and the LDS Faith - . what everyone should know…. what is the divine institution of