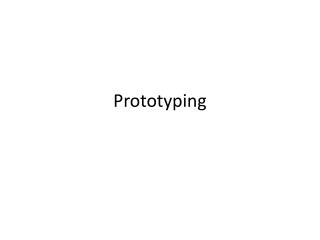 Prototyping. Prototyping. Brings designs to life for: Designers Users Can be as sophisticated or as crude as you want Allows you to explore ideas Used properly, it is at the heart of human-centred design. Prototyping. May (rarely) mimic the whole system. Prototyping - . agenda. why bother with prototypes? approaches to prototyping dimensions of fidelity prototyping in