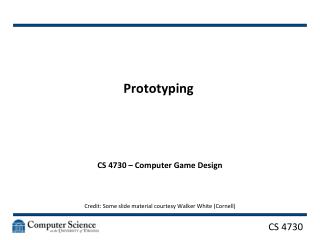 Prototyping. CS 4730 – Computer Game Design Credit: Some slide material courtesy Walker White (Cornell). What is a Prototype?. In the simplest terms, it’s an incomplete model of your game It usually has a reduced feature set The selected features are usually the “most important” Prototyping - . agenda. why bother with prototypes? approaches to prototyping dimensions of fidelity prototyping in

Prototyping - . prototyping. brings designs to life for: designers users can be as sophisticated or as crude as you want