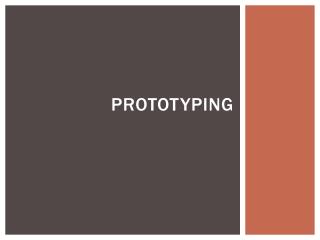 Prototyping. Agenda. Why bother with prototypes? Approaches to prototyping Dimensions of fidelity Prototyping in practice. Introduction. What is a prototype?. A prototype is an incomplete, early version of a product Prototyping - . prototyping. brings designs to life for: designers users can be as sophisticated or as crude as you want