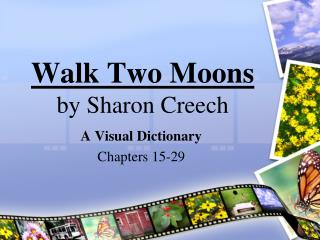 Walk Two Moons by Sharon Creech. A Visual Dictionary Chapters 15-29. A Snake Has A Snack. Chapter 15. Bowie knife and sheath p. 93. This knife was made popular by Col. Jim Bowie, in the early 1800s. The sheath is the protective covering. Walk Two Moons - . journaling- chapters 1-8 . think of a time when you took a long trip by car or bus…. what was the