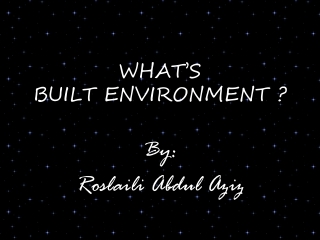 WHAT’S BUILT ENVIRONMENT ?. By: Roslaili Abdul Aziz. Introduction. The course begins with the understanding of physical environment as a whole. The built environment is an integral part of the infrastructure necessary for human survival. What Makes an Effective PowerPoint Presentation? - . avoid using powerpoint as a

Why Built Environment - The physical environment?. provides the setting and backdrop by which we live our livesimpacts on

The Built Environment - Definition. the built environment is the man-made surroundings that provide the setting for human

Animating the Built Environment - . more-than-representational approach to landscape analysis. “our human landscape is

Environment PPT - . jake koepp. minnesota’s population. the us state of minnesota has a population of 5,220,393 and

KDC Built environment challenge - . 4m ermington west public school. where it all began. after learning about the water