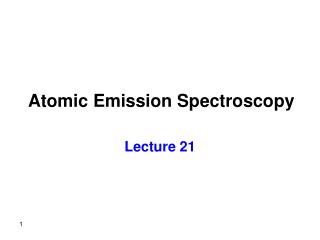 Atomic Emission Spectroscopy. Lecture 21. Qualitative analysis is accomplished by comparison of the wavelengths of some emission lines to standards while the line blackness serves as the tool for semiquantitative analysis. 13.7 Spin-Spin Splitting in NMR Spectroscopy - . not all peaks are singlets signals can be split by coupling of nuclear

ULTRAVIOLET-VISIBLE SPECTROSCOPY - . semester dec – apr 2010. in this lecture, you will learn:. molecular species that

Near-Infrared Spectroscopy as a Process Analytical Technology in the Biotech Industry - . presented to the advisory

Activity: Emission spectroscopy and smart sensors - . what is a smart