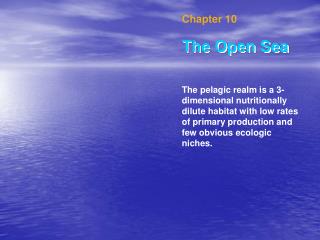 Chapter 10. The Open Sea. The pelagic realm is a 3-dimensional nutritionally dilute habitat with low rates of primary production and few obvious ecologic niches. Chapter 10. Inhabitants of the Pelagic Division.