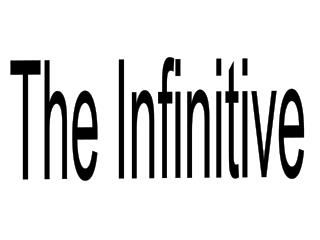 Infinitive - . definition. an infinitive phrase is the general to form of the verb made into the noun, adjective, or

The Infinitive Phrase - . infinitives are a form of the verb that comes after the word to and acts as a noun,

INFINITIVE - . he watched the people …towards the trains. a. to hurry b. to have hurried c. hurry. he was advised …

Infinitive Basics - . marshlatin.wordpress.com. what is an infinitive?. when you look up a latin verb in a latin-english

Infinitive Phrases - . it’s all up to “to”. infinitive. form of a verb that (generally) appears with the word to in

Passive + infinitive - . sample sentences : it is said that he knows some very influential people. he is said to

The Present Active Infinitive - . laudāre. monēre. to praise. to warn. dūcere to lead . discere to learn. the

Starter- Find the infinitive - . extension- decide the tense of the other verbs. put p (past), pr (present), f (future).