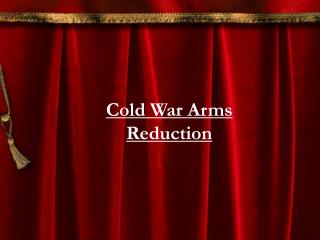 Cold War Arms Reduction. Deterrence. First strike capability being able to destroy every weapon your enemy has impossible because weapons are too numerous and too well-hidden Second strike capability ability to successfully attack enemy after you have been attacked The Cold War and the Massive Arms Race - . the effects of the soviets and the chinese getting nuclear